My family and I are trying to embrace a healthier lifestyle with using all natural soaps and eating more veggies. There's no better way to teach our kids about plants and get healthy than to plant a garden.

We wanted to grow a garden but we're new to it so we wanted something easy to maintain that didn't require a lot of setup. That's where GreenStalk comes in. The GreenStalk Vertical Garden system is a collection of specialized pots that stack on top of one another. It allows you to grow a tower of crops that that don't take up much space and are easy to water.

Check Out My Green Thumb

We started off slow by setting up 2 different towers of crops. In our first tower, we planted carrots and peas. Tower number two has radishes. You can see our radishes sprouting below. 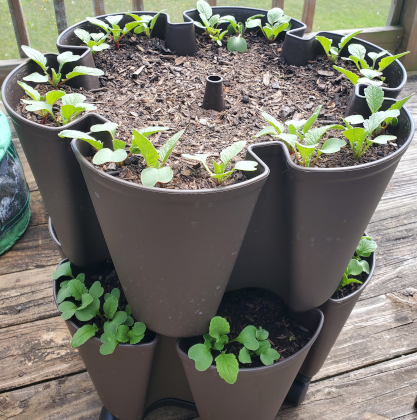 So what's the pros of the GreenStalk system?

Nothing is all unicorns and rainbows... there are some cons.

Verdict AKA Green Thumbs Up or Down?

I haven't gardened since I helped my parents with their plants many years ago. I remembered hating gardening as a kid because I had to kneel in the dirt and my back started to hurt after a while. The GreenStalk Vertical Garden system solves those problems as well as letting me grow plants anywhere. Overall, I love the GreenStalk system and I'd recommend it.

GreenStalk earns two green thumbs up and a Fire!