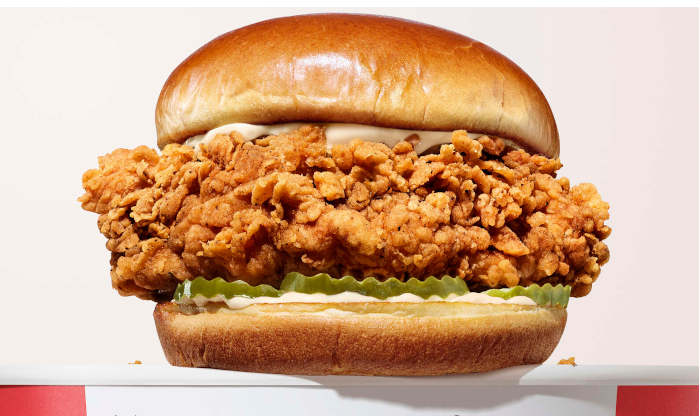 (* I totally copyrighted that just now. If you want to use it, be sure to contact me about licensing fees.)

Let's Have A Fair Fight

To keep this fair and avoid a fowl, we'll use the same criteria as last time: spiciness, juiciness, pickles. Ring the bell and let's get ready to rumble!

While delicious, the Chick-fil-A Spicy Sandwich isn't that hot so I always add Sriracha sauce to spice it up. KFC's new sandwich isn't very spicy either so we'll call this round a draw.

KFC's sandwich is juicy and tasty with just a little bit of crisp while Chick-fil-A's sandwich packs an uppercut of juiciness. The Col throws a mean punch but the Cow's uppercut can't be beat.

Peter picked a peck of perfect pickles and added them to our sandwiches. Both sandwiches feature yummy pickles that crunch when you bite into them.

I have to hand it to KFC... they created a really good spicy sandwich with a little bit of spice, juicy chicken and crunchy pickles. It was very close but I have to declare Chick-fil-A the winner.

KFC didn't beat the defending champion, Chick-fil-A, but it's very good so I give it a Fire!